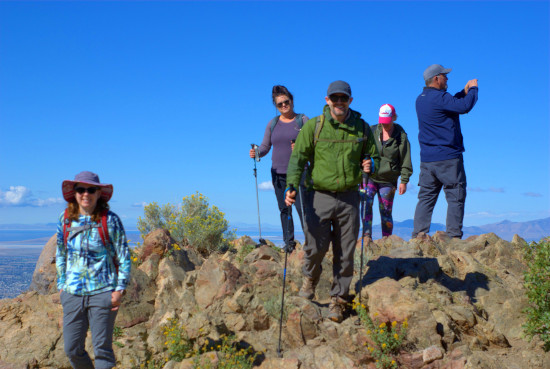 What a difference a couple weeks make. When I last did this on Labor Day, I was as dingy as a 3 dollar bill by the time I reached the top. Today, I was pretty much fine the entire way, and if I had time, I would have continued on over to Malan’s Meadow (I think that’s what it’s called). Work beckoned, so I had to do the bare minimum. This group was a fun one too. There were a few that kicked off like gang busters. We tried to warn them that the trail was long, steep, and draining. It wasn’t until about 3/4 the way up, that they started to putter out. Even my friend was having a hard time breathing not long after the hard stuff hit. She later hiked with her son (it’s his Birthday), and said she was fine on their hike. Maybe it was the fast, slow, fast, slow pace we had going on. She was a trooper though, and kept on going.

At the peak, we all took in the views, snapped a bunch of pictures, drank some water, nibbled on a little food, and went back down.

For me, going down is easier on the lungs, but my legs get the shakes after a mile or so. It makes your footing a little sketchy, and you never know if your leg is going to say fuck it, and let you tumble on down the road.

I really enjoyed this hike. I’m meeting a lot of people, different personalities, and a lot of different ideas on what hiking is all about. I am a firm believer in “The Journey is More Important than the Destination”. Some people are in it to see how fast they can make it up, other’s it is strictly working out, and some just want to reach the top. The sense of accomplishment is the same regardless, but I want to soak it all in for as long as I can, ever time.

Here are the pictures, some are good, some suck, and some are just ones I liked in the moment.