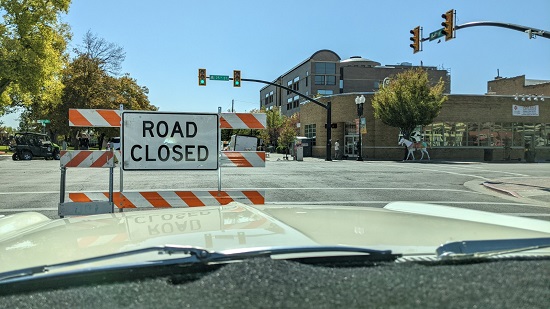 It has been for ever since I broke a sweat in the mountains (it’s really only been about 4 days, but that’s forever for me). I made sure to pack my stuff for tonight after work. I have been a busy, but happy guy this weekend, and have put resting, relaxing, and visiting over hiking this weekend. Back at it tonight though, it is time to do some trail thinking.

I’m writing this before my hike, because the last few have had to be back dated to reflect my hike, and I seem to loose the raw mood of the moment when I wait, or think about it. I am better at this blogging thing if I sit down, while still in my funk, or fresh train of thought, and hammer out what I feel inside.

A little about the last weekend first. I entered my car (1967 Comet 202) in the local 25th Street Car Show. I’ve done it pretty much every year that I’ve known about it, and it is a pretty good show. I mainly just love 25th street, and it’s a bonus they close it just for our well cleaned cars. This year was mixed in with my 2nd date, so it was a little different. I don’t know how much she minds or doesn’t mind me talking about it on here, but here goes.

All summer, I’ve mainly focused on getting myself to a state of mind I would think of as healthy, or at least getting the tools to become healthy emotionally. Long days of conflicting thoughts, hard crying, difficult realities, and learning to talk to myself in a kinder gentler voice than I normally do. Needless to say, working alone, in a quiet garage with a car (none specifically, I’ve got several) that’s making your temper flare, isn’t the most healthy way to deal with things you’ve stomped down deep for decades. Instead I hiked, and took pictures, wrote in this blog a LOT, and talked to my family, and a few friends continually. As I felt better, I started to wonder if I was ready to tread the icy waters of the dating world again (after all, it was one of the catylists that sent my down this painful path).

A little over a month ago, I kicked the dating apps back on (I had a few memberships that weren’t expired from last winter so I just enabled them again, updated my profiles, and started swiping). It felt what I imagine a Stalkhome Syndrome victim feels. You really want to enjoy it, but it’s absolutely terrifying. Most of the faces had changed, but the stories were generally the same. “Seeking FWB”, or “Looking for next husband”. “Kind, caring, honest, and loving seeks the same”. “If you’re LDS don’t talk to me”, and/or “If you’re not LDS, don’t talk to me”. Finally the crem dela-crem, “nothing serious, just want to have fun” (that’s a neon red flag for “Train wreck comin’ in hot” right there). I did meet a few very nice people along the way, and I noticed the types of people I was talking to (generally texting), were a completely different type of person than I was matching up with over the winter. I feel that maybe, you attract what you project. I hope I project much better attitude, gratitude, and understanding now. I’ve definitely handled rejection much better than I had over the winter, and I haven’t entertained the thought of responding to anyone I wasn’t genuinely interested in talking to (it used to be really difficult for me to ignore, block, say no to, or delete anyone. So I ended up begrudgingly talking to people I had no interest in).

I went on a couple hikes, had several phone calls, and a few texting around for introductions. Both hikes turned out to be very nice people, but no chemistry (for either of us). The phone calls were fine, but again, by the end, it was obvious, there wasn’t going to be another phone call, let alone seeing each other in person. Except for one.

I spoke about her in an earlier post (1st Date of Many). So this one, I guess could be called “2nd Date of Many”, but that felt too cliche, or planned (not that I can figure out how to spell “cliche” apparently). I guess you could call the car show our second date. We did walk around a bit, had dinner together, drove around in my car after the show for a while, then sat on my porch for a few hours talking about life, the universe, and everything. We both learned a little bit more about each other (as you’re supposed to do when you’re getting to know one another), and although I keep waiting for that big red flag to flip up (for either of us), there hasn’t even been a flag I needed to justify. The closest things to a red flag I’ve felt, were our religious differences (we’ve talked, I don’t feel any conflict), and that she has been suppressed for so many years, she is still learning who she is (and where she’s at emotionally, concerning a relationship – this scares me, but the fear keeps me very aware of my boundaries, and very cautious of how much I expose my feels). I encourage her to do what makes her feel her best, do the things that let her be still (she wants to be still), and do the things she didn’t even know she wanted to do when she was married. I hope that by finding herself, it doesn’t mean I’m no longer of interest, but if that ends up being the case, I think we’ll remain friends for years to come.

This morning she swung by my house, picked me up, and we went and got donuts. We came back, chilled on the porch, talked a little, and I showed her how to change her headlight on her car. After a nice hug, away she went to work, and away I went to lay down to nap a few minutes before work (and the Talladega NASCAR race was on).

I think anytime you’ve spent the majority of your time texting, phone calling, and seeing a person (in person) for a few weeks, there’s going to be some uncertainty about “what are we”. Under my circumstances, and hers, I think “what are we” is good enough for now.