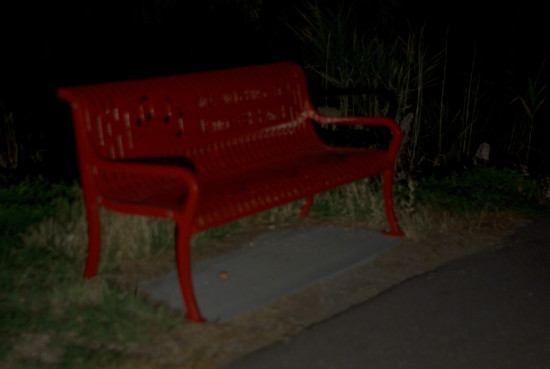 I am really unsure how to write about this walk. It was really wonderful, not the best pictures, but the conversation was good, the company was really nice, and I hope there are many more to come. Hooper isn’t a hot bed of activity, but it was really nice to be out away from the city, lots of new subdivisions trying to ruin the country feel of Hooper, and the mosquitos must have been imported from Alaska because they were vicious.

I’m not sure how far we walked, but the clock was moving a lot faster than I wanted it to, and the moon was flying up the sky way too quickly. We spent a long time in the middle of a soccer field taking pictures of the moon as it coasted up over the trees and light posts. When we decided it was time to part ways and call it a night, we ended up in the middle of a street, still watching the moon, stars, and clouds as they coasted around the sky, blocked the stars, and made amazing shapes in the sky.

Such a little thing in a rural part of town, but standing in the middle of a street brought back memories of my childhood in Centerville. We’d gather under a street light, bull shit with the other neighborhood kids, and hours would go by before a car would come by and make us move. Tonight felt a lot like that, it was nostalgic, new, and comfortable.

Not many pictures came out very well, but here are a few that were decent (the moon looks like the sun in most of these).