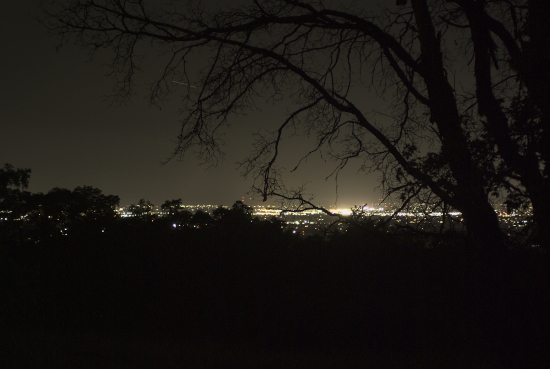 Tonight I decided to trek out on a short’ish 2 mile night hike called “Lone Oak Loop“. Not unusual, I enjoy hiking at night (usually), really enjoy night photography (doesn’t mean I’m good at it), and can get a lot of things worked out in my mind during these hikes.

Tonight was quite a bit different. It was fine until I entered into the forested areas. There were sounds in the brush, my light only pierced so far into them, and it felt like I was being followed. Once it really got steep, and I had to pause occasionally to catch my breath (and I didn’t bring water, so my throat was chalk), I kept an eye behind me on the trail just to see if there were a pair of eye’s tracking me. I never saw any, but oggity boogity I didn’t feel safe.

Overall the hike was pleasant though. Temps were comfy, when I could see the city it really stretched out wide, and it seemed to be a great night for seeing. The climb up was really steep (maybe felt steeper because it was dark, and I swear I was being followed), and the decent was sketchy slick, especially because I was making a video at the same time (included with the gallery below).

A lot to think about on this hike, mostly questions, worries, and concerns. It’s a touch balancing act to keep a friendship when there might be underlying issues one or the other isn’t aware of. My hope is that they can be resolved, but the pain it causes may be too much to continue.

Short video from the hike (Looks like it’ll be audio only this time):

Here’s the images, I really didn’t take as many as usual tonight, it was just too sketchy, and there wasn’t any good places to pause and take experimental images.