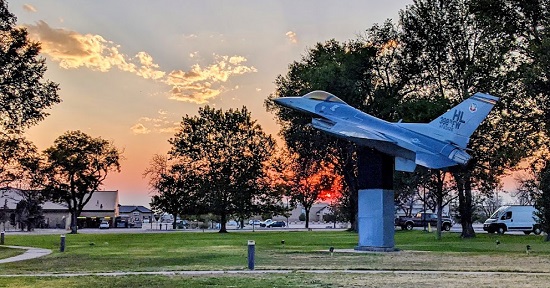 Tonight is moving along at a snails pace, but it was punctuated with some “tech support”, and sunsets. Not too long ago (ball park 4 years ago), sunsets were “nice” but I really didn’t pay them much attention. I have an appreciation for them now, and their ever changing dynamic. Tonight I was coming in the building after helping a friend figure out how to make room on their phone when I noticed the sun was kicking every clouds ass in the sky right then. Pointing my phone west, I took a picture and sent it to them. Walked around my building and remembered the F-16 on a stick. I’ve always wanted to take some pictures around there, so I took one there. Then the sun was creeping behind a cloud, so I hurried to a parking lot across the street, and took a picture quickly.

The power lines and buildings in every picture are reality. I was at work, so there was no way to avoid them. I’m trying to take those abominations in stride, and say “they add nuance” to the scene. It’s bull shit, but it’s also the best that could be done at the time.

Today has been a low key mental day. I can’t say it started that way, but it has gotten better as the day goes by (REALLY rare, and absolutely backwards to my norm). The tickle of what I’ve been feeling checks in on me from time to time, but I’ve been able to keep it on the outskirts, and focus on the here and now. Maybe it is because there hasn’t been a lot of reminiscing today, or I’ve made a focused effort not to reach out to anyone today for anything except to answer a question, and help with some “techie” stuff. I did reach out to one of my friends that is also having a shit show of a mental breakdown right now too, but they were doing well, so there wasn’t much chit chat. It has just been a day of me, meditation, a few short walks around the building (shit, it’s one of the biggest buildings on base, so I got my steps in, regardless). I’ve steered clear of any of my anxiety, depression, or relationship pod-casts, haven’t opened a book or listened to one, and I even had a chicken wrap for lunch (yes mom, I ate today).

As much as I want this process of getting through everything I’m dealing with internally to progress faster, I have to remind myself to slow my roll once in a while, and let my mind digest the fire-hose of learning I’m trying to make it absorb. I guess I feel like today was my cheat day. I didn’t hike, didn’t use my camera, didn’t listen to one audio book or pod cast, didn’t crack open my new book (killing me because I think I can finish it in one more sitting), and I got to text with someone that makes me smile just by imagining their voice in my head as I read their messages. I enjoyed the normal, mundane, talk about tech, photographs, housing markets, gas prices, and finally sunset pictures. They’re the type of person that is helpful, just by being them self. I text them a dad joke, or a dad-style joke every morning (been doing that for about a month now). I “think” they enjoy them, but I really don’t know. There isn’t usually much of a response except for a laughing face, or a “oh geeze” face once in a while. As long as I know they might start their day with a smile, I’m happy.

Have a good day who ever reads down to here, I appreciate you taking the time to wonder around my words. This blog is more for me, more than anything. I imagine once I feel healthy and stable again, I’ll defenestrate this, and turn it back into the dust collection repository on the web that it’s been since 2001. (My intention is to keep it as a reminder to myself, of what it takes to stop being a covert train wreck, and communicate, among other things).